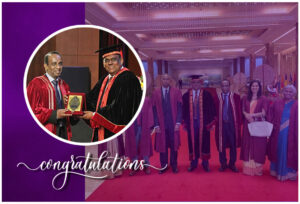 Professor Senaka Rajapakse is the Chair and Senior Professor of Clinical Medicine in the Faculty of Medicine of the University of Colombo. He is also the Director of the Postgraduate Institute of Medicine of our University. He is an honourary consultant physician at the National Hospital of Sri Lanka. He graduated MBBS with First Class Honours from the University of Colombo, with eleven distinctions, and many prizes and medals including the Andrew Caldecott Gold Medal for the Final MBBS in 1993. Thereafter he specialized in General Medicine and obtained his MD from the PGIM in 1999 and the Membership of the Royal Colleges of Physicians of the United Kingdom in 2002. Today he is a fellow of both the Royal College of Physicians of London and the Royal College of Physicians of Edinburgh. He reached the pinnacle of his career when he was elected the President of the Ceylon College of Physicians in the year 2021. He is an academic leader, much sought after clinician, and one of the leading medical researchers in our country having been ranked among the World’s Top 2% of scientists in the 2020 list of outstanding researchers prepared by Elsevier and Stanford University. He has over 150 publications in peer-reviewed journals, with an H-index of 38, and over 4,800 citations. He has received numerous President’s Awards for Research, the University of Colombo Research Award in 2002, 2012 and 2015, the Vice Chancellor’s Award for research in 2017, and the Committee of Vice-Chancellors and Directors (CVCD) Award for the Most Outstanding Senior Researcher in Health Sciences in 2016. In recognition of his scientific achievements he was elected a Fellow of the National Academy of Sciences of Sri Lanka in 2020. This brief citation illustrates the professional life spanning 29 years of an academic, clinician, and researcher par excellence. Vice Chancellor, I have the honour of presenting to you Prof. Senaka Rajapakse for the conferment of the Postgraduate Institute of Medicine Vice Chancellor’s Award for Research Excellence for the year 2019.

CALLING APPLICATIONS FROM QUALIFIED CANDIDATES FOR THE FOLLOWING PROGRAMS – FACULTY OF MEDICINE, COLOMBO