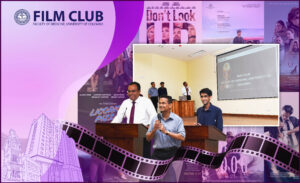 Film is a work of visual art that simulates experiences and conveys ideas, stories, perceptions, feelings, beauty, or ambience through moving images, sounds and music. Film can make the viewer travel through time, space and imagination and have the power to influence views and emotions. The ability to stimulate the senses make film a captivating medium of communication.

Since films are based on human experiences, it is invariable that illness, medicine, medical ethics and medics are portrayed in many films. However, films do not just focus on diseases. They portray how diseases affect the individual, the family and society. It is the impact and interactions that are dramatized and captivate audiences.

Doctors are trained to recognise diseases. A good doctor will go beyond and recognise the person afflicted with the disease. The better doctor will appreciate the impact of the disease not only on the individual but also on his family and society at large. This is the very intention of the UCFM film club and the MedCinema. We intend to evoke and enhance the humane aspect of medicine by going beyond just recognizing diseases and illnesses. We want medics to be able to recognise and be sensitive to how diseases impact on our own humanity and dignity through the artistic portrayals in film.

The MedCinema organised by the UCFM Film Club involves the monthly screening of a film portraying a medically related theme, character, or circumstance. The screening is preceded by a preamble to the film and followed by a brief critique and a Q&A session. Each department in the Faculty of Medicine as well as medical students are given the opportunity to present films at the MedCinema to incorporate a wide range of medical disciplines that are portrayed in film. The intended audience of the MedCinema includes medical students and interested University academics.